The Space Tourism Society (STS) was founded in 1996 as the world’s first society focused on the establishment and expansion of a vibrant, exciting and profitable space tourism industry.

Throughout 2016 we are celebrating the past two decades of continuous operation, expansion and accomplishments.

Imagine how much our society and industry will grow and diversify over the next twenty years.

We hope you will be part of this grand adventure. 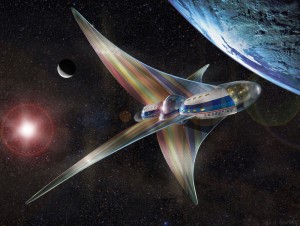 Here is the design of the world’s first orbital super yacht named Destiny. This beautiful 300 foot long space ship would accommodate ten passengers, six crew and many robotic service operators. She would be assembled in Earth orbit with several inflatable sections. The sails would collect solar energy.