Space Tourism — Do you want to go?

Excerpt (from the Introduction): 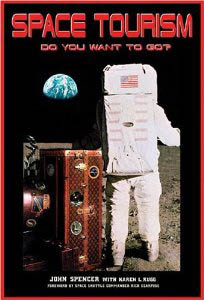 Since the early 1980s a small group of visionaries have been pioneering the frontier of off-world tourism. Overcoming significant obstacles, their quest to start the space tourism industry was achieved on April 28, 2001, when American businessman Dennis Tito lifted-off from Russia into Earth orbit for a week-long voyage aboard the International Space Station. He was the first space tourist. Upon boarding the Station he said “I love space.” He paid millions of his own dollars to fulfill his life-long quest to experience space.

Since then another space tourist has flown, and many more are lining up for the opportunity. Several private enterprise space tourism companies have recently been formed, some by multibillionaires including the co-founder of Microsoft, Paul Allen, the founder of Virgin Airlines, Sir Richard Branson, and the founder of Amazon.com, Jeff Bezos. They are spending millions of dollars of their own money. Why? Because they are positioning themselves to be leaders — the Walt Disney and Baron Hilton of the space tourism industry; an industry destined to be the largest, most prestigious, and profitable industry off-world.

Millions of people from around the world want to go into Earth orbit to have that life-changing experience. To free float in zero gravity, to see the Earth, the Moon, and the stars from space. In the year 2004, just over 500 individuals have had the privilege of going off-world. But that number will significantly grow as private enterprise designs and builds the fleets of orbital access vehicles, orbital super yachts, and space and lunar cruise ships with names such as ‘Orbital Ecstasy,’ ‘Ambrosia,’ or ‘Lady of the Stars,’ which will eventually serve tens of thousands, then hundreds of thousands of space tourists.

Many of those going will have won international lotteries for their dream vacation. In the future, space passengers will float and dance in zero gravity, swim in spheres of warm colored water, enjoy games, saunas, exercise, massage, shopping and world class entertainment. They can try zero gravity hair styles, wear the latest in cruise fashions body paint and accessories. Participate in orbital sports, space walks, (floats) the finest dining and of course, make love in the privacy of their orbital cruise cabin. The Moon will play host to lunar resorts, health spas, and low gravity sports stadiums. The world will be thrilled as powerful racing yachts named ‘Challenger,’ ‘Intrepid,’ and ‘Quasar’ compete in half million mile long space regattas around the Moon and back to Earth to win the coveted ‘Solar System Cup.’

Today millions of people have space tourism themed experiences spending well over a billion dollar a year flying in aircraft which produce zero gravity experiences, visiting NASA centers, space camps, space theme parks and attractions, space museum’s, IMAX films, planetarium’s and observatories, going on astronomy cruises, purchasing books, media, and space merchandise. This Earth based space tourism industry will have massive growth over the next decade as a whole new generation of totally immersive multi-day space, lunar, and Mars themed simulation ventures open to the public. For the price of a normal vacation people can become ‘Simnauts’ and participate in futuristic space tourism vacations, adventures, and real research in the emerging ‘SimExperiences’ industry.

This is the first book published in the United States on the space tourism theme. It was written and designed by one of the world’s leading authorities and pioneers in the growing field of space tourism, space architect, John Spencer. Founder and president of the Space Tourism Society, (STS) www.spacetourismsociety.org. In it he premieres his vision, the “Destiny” orbital super yacht design and master development industry plan for expanding the space tourism movement and creating the long-term space tourism industry. His plan offers opportunities for non-rocket scientists to participate today, to make a difference, and to have a wonderful time in the process.