The National Space Society’s (NSS) 33rd International Space Development Conference (ISDC 2014), was held in Los Angeles between May 14-18, (isdc.nss.org/2014/). Attendance passed 1,100 with almost 400 students from around the world.

The conference theme, “A Space Renaissance” was very well received and it reflected the transformation that is happening now in the space industry toward private space enterprise and space tourism ventures. 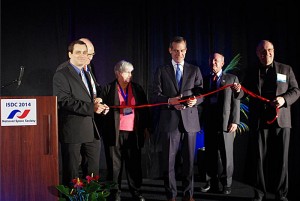 The Mayor of Los Angeles, Eric Garcetti, officially welcoming the ISDC to Los Angeles and starting the conference with a well informed speech and a ribbon cutting ceremony.

John Spencer, founder and president of STS and Nicola Sarzi Amade, former STS Director of Chapter Development and current member of the STS Board of Directors, were the conference Co-Chairs.  Pat Monture was the ISDC 2014 Chairperson. NSS.org

The ISDC was produced by the professional events production company,

Tom Vincze, Imaginary Pictures, was the master graphic designer and web master for the ISDC.  He is also the web master for STS. www.imaginarypictures.com

For two years STS leadership helped plan the overall conference as a major STS project.  We created 11 tracks which had almost 200 speakers and panelist.  We also recruited many of the track chair people and staff who worked the show from our large STS network.

Our STS Board of Governors was very active in the ISDC.

Our STS Board of Directors was also very active.

David Knight, chaired the Space & Media track which brought in respected professionals from the entertainment and media industries including producers from the new COSMOS TV Series.